NBA fans may be in store for another all-time great offseason.

Last year saw multiple superstars change squads. Chris Paul took his talents to Houston to form a superstar backcourt with James Harden that would later push the Warriors to a game seven, Paul George and Carmelo Anthony ventured west to Oklahoma City in what seems to be a failed superteam experiment, Jimmy Butler joined the Timberwolves’ young core and dragged them to the playoffs and, of course, Kyrie Irving abandoned Lebron James and joined the promising young Celtics, bringing Gordon Hayward to Boston with him.

While all that mayhem from a year ago was tremendously exciting at the time, and fascinating to watch pan out, this offseason has incredible potential as well. Lebron James, Paul George, and Demarcus Cousins are all blockbuster free agents whose destinations are all quite uncertain. However, this inevitability has loomed on the horizon as something we have known all season.

What truly shook this offseason to its core was the news that the mild-mannered, defensive-minded, 1997 Chevy Tahoe driving Kawhi Leonard has demanded a trade out of the prestigious, seemingly flawless San Antonio Spurs organization.

Leonard was widely considered a top three player in the league when he was healthy during the 2016-17 season, and as he is just 26 years old, there is little to suggest he can’t return to that form. By joining a potential contender, Leonard could entirely shift the dynamic of the NBA- a dynamic which has frustrated many thanks to the overwhelming dominance of the Golden State Warriors.

If you fall into that category, buckle up. Your prayers for parity may just be answered. The potential for change hangs like fog in the air, and with the sudden availability of a player of Kawhi’s prowess, there is a chance that the world may just get a King Kong to face that Godzilla squad out in the Bay.

With all that said, I shall unveil what I believe to be the three most likely destinations for Kawhi Leonard (and the only ones I truly consider a possibility) in reverse order… for dramatic effect, of course.

According to Vegas, the Celtics actually have the second-best odds of landing Leonard, but I see problems with this theoretical pursuit.

First, however, let’s address why this works.

The Celtics are on the brink of championship contention, and acquiring a premier, unselfish, two-way talent such as Leonard may push them over the hump. He’s not only an elite defender but can also guard four positions, making him the perfect fit for Boston’s “switch everything” philosophy.

Offensively, Kawhi can fit within the flow of the offense as somewhat of a spot up shooter who can also create for himself and get the team a bucket when needed. He fits what they do and would undeniably take some stress off of Kyrie as the primary conduit of their offense.

Additionally, the Celtics could certainly put together the best package of any team in this conversation. Thanks to their plethora of young talent and draft picks, Boston has way more bullets than anyone else in this metaphorical arms race. Whether or not they want to give these assets up is an entirely different dilemma.

The picks are no problem as Boston could potentially have four valuable first round picks in next year’s draft, but I do not see the Celtics giving up Jayson Tatum for Kawhi. The 20-year-old has shown tremendous potential and seems to be on track to being the cornerstone of this franchise.

Jaylen Brown and Terry Rozier are likely not enough to catch the Spurs’ interest, though plenty promising themselves (especially Brown), and would require further complicating salary add-ons to balance out the cap requirements. This leaves Gordon Hayward and Kyrie Irving- the franchise’s two biggest stars- as the only interesting assets in the cupboard for Danny Ainge.

In my opinion, neither of these recourses are viable as they simply do not work out cleanly for the Celtics.

Of the two, Irving is the star who is more tradeable as of now, as he is yet to commit to Boston long term. There are rumblings he may look to head elsewhere next offseason, placing some pressure on the Celtics, but in this scenario, dealing Irving is illogical. Although Hayward’s contract extends through the 2020-21 season, if they were to hold onto him and acquire Kawhi, trading Kyrie, they’d be left with Terry Rozier as their starting point guard and an almost excessive amount of high-level wings. This would create a log-jam as Brad Stevens attempted to shoehorn a lumpy, uneven roster into a rotation that almost certainly could not distribute the proper amount of minutes to Boston’s best players.

Also, it is a fair question to ask whether or not Danny Ainge event wants to fiddle with such a promising roster? After all, the current assembly of talent pushed the Cavaliers to a competitive game seven in the Eastern Conference finals without their two best players and boast an unmatched combination of young and veteran talent. It is a group that suggests contention for the better part of a decade. Is trading valuable pieces that are already on your roster for a man coming off of a season-ending, and potentially chronic injury, who is far from certain to resign next summer, worth the risk?

Honestly- maybe. Kawhi is exceptionally gifted. Still, there is definitely not a clear yes here.

Leonard to the 76ers makes a lot of sense. As much confidence as this organization likely has in their young talent, they cannot simply brush off the fact that they were just bested in five games by a Celtics team missing their two best players. They have a great foundation, but in this superteam era, roster tweaks are essential in order to truly contend.

If the 76ers were to add Kawhi Leonard, they’d immediately become the favorite in the East in my opinion. Leonard is a top-notch scorer who does not need to dominate the ball and is a high level three point shooter off the catch (he shot an astounding 44.3% from three in 2015-16), making him a seamless fit in this 76ers offense. By adding a true scoring threat from the perimeter to go with their existing dominant post presence in Joel Embiid, and Ben Simmons, their elite young playmaker, Philly ramps that offense up to another level. 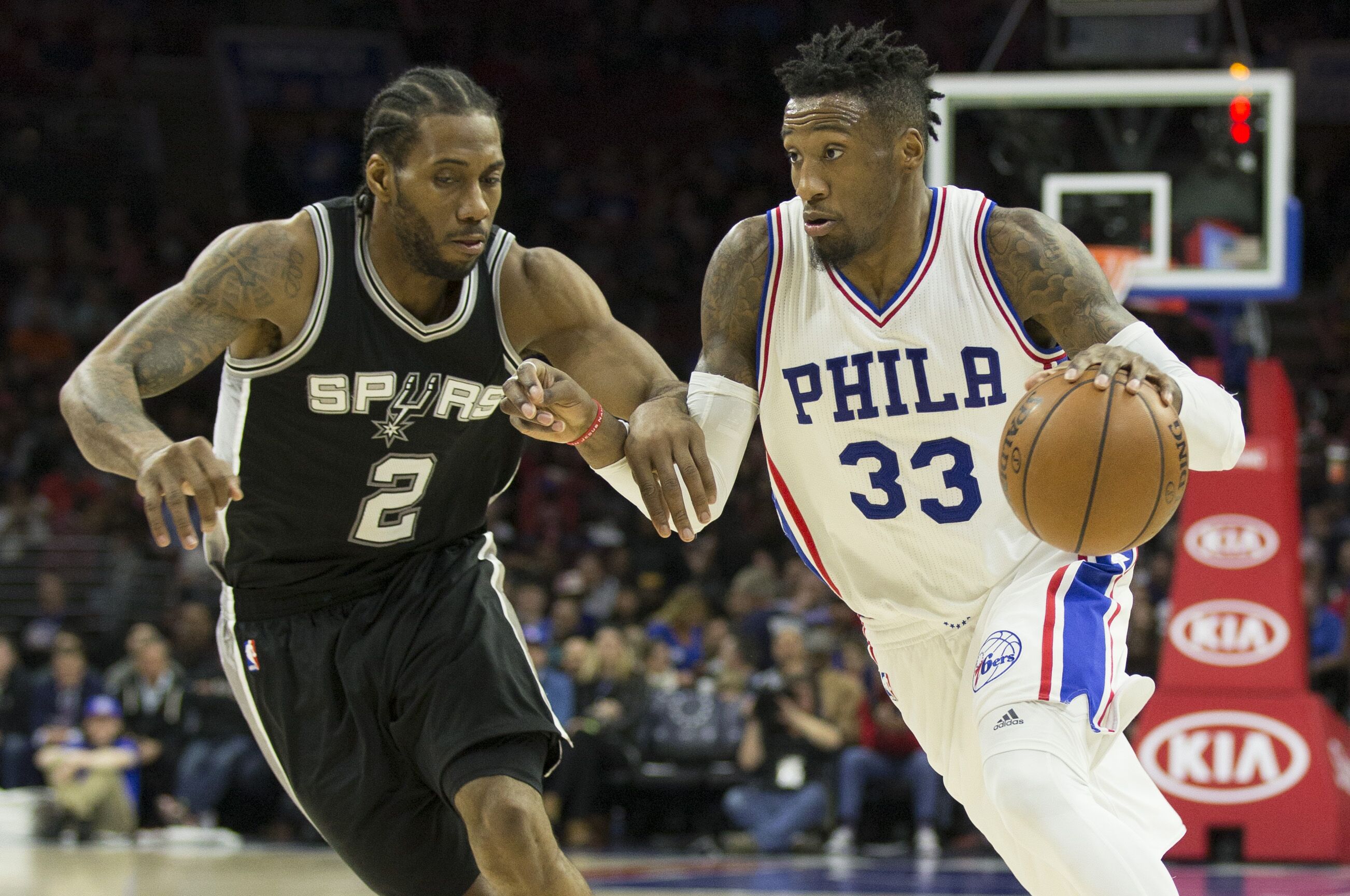 Even greater: the acquisition of Leonard would turn the 76ers into the hands down best defense in the NBA. Throwing a two-time defensive player of the year like Leonard in there with another elite, versatile defender in Simmons, and an all-defense rim protector in Embiid would be flat out nightmarish for the rest of the league. Plus, if Robert Covington were able to survive the potential trade package for Kawhi, Philidelphia would have yet another all-defense caliber wing. Yikes.

If the 76ers were to offer up their 10th overall pick in this draft, the lower 2019 pick of Sacramento or Philadelphia unless the Kings have the first overall in which case it will be that, last draft’s number one overall pick in Markelle Fultz, and an established two-way contributor such as a Robert Covington or Dario Saric, the Spurs would undeniably be tempted to accept.

While a lot makes sense here, there are still apparent issues. The 76ers have thus far stuck by their mantra of “Trust the Process” without fail, and whether or not they’d all of a sudden give up young assets and betray that ideology is a necessary question to address. The recent and precarious departure of general manager Bryan Colangelo further complicates this as the convictions of Philadelphia’s front office are not certain. It is not even 100 percent certain that the Sixers have the infrastructure to articulate any deal at this current moment.

Also, Leonard has stated that he wants to play in Los Angeles, making a trade for him a big risk when they already have such a strong young core. Having to give up on a player like Fultz, who you traded up to pick at the top of last year’s draft and is far from done developing is not an easy pill to swallow.

However, even with all of these questions, this is certainly a possibility and could set Philly up for a dominant future. Still, though, one more logical option remains.

It seems that a superteam could be in the cards for the all-time great franchise in Los Angeles (not the Clippers). As of now, there is great speculation that free agents Paul George and Lebron James both intend to sign with the Lakers this offseason, which would only require the Lakers letting one relevant piece, Julius Randle, walk. This alone puts the Lakers on the brink of contention, but if they were able to acquire Kawhi Leonard, they would be thrust into a seat at the grown-up table in regards to the championship conversation.

Leonard has listed Los Angeles as his preferred trade destination, making them the overwhelming favorites to land him as all other organizations will be tentative to sacrifice resources on a potential one-year rental. Leonard and George are ideal star-fits to pair with Lebron, as they are both tremendous, versatile defenders who can shoot the long ball and are able to create for themselves on offense without necessarily being ball dominant.

Now, the Lakers would have to pretty much dismantle their roster in order to snag Leonard, likely giving up something like Brandon Ingram, Kyle Kuzma, and a first-round pick in the distant future. While I am a big Brandon Ingram fan and believe he has all-star potential, as well as being aware that Kuzma had a very impressive rookie season himself, this is a trade for a top-five player in the league in his prime. In truth, this would still be somewhat of a steal for the Lakers, but the Spurs may be forced to take it considering Kawhi’s leverage.

Despite losing two of their premier young players, the Lakers would hold onto a nice three and D player in Josh Hart and a high-level playmaker in Lonzo Ball, both of whom will presumably improve as they age. They also come from a very fortunate place in regards to acquiring additional role players to compliment their squad, as they hold the prestige of the Lakers organization and the city of Los Angeles (always a top free agent destination), have the best player in the world on their team (who players flock to join), and a roster chock full of stars (ring-chasers, grab your inhalers).

For that reason, I have faith that even after obtaining the trifecta of Paul George, Kawhi Leonard, and Lebron James, the Lakers could fill out their roster with solid veteran contributors. Kawhi could return to Los Angeles and win big with this move, plus the Lakers have to be wildly excited by this opportunity to build a true contender. Therefore, I find Leonard to LA to be the most likely possibility.