You’ve undoubtedly heard it broadcast on both progressive and conservative media outlets, uttered by pundits and politicians on both ends of the ideological spectrum. “Bernie Sanders is a socialist,” they will tell you.

This statement, whether viewed as a piece of anti-Bernie propaganda or as a rallying cry for Bernie’s band of wannabe revolutionaries, is wholly inaccurate. There are several reasons why Sanders’ policies do not align with socialist principles, and in this article, I will thoroughly explore each one and explain its significance.

The first reason for which Bernie Sanders is not a socialist lies within his healthcare plan. This may seem strange, given that Sanders is often said to be a proponent of “free” healthcare.

However, as one glance at his official campaign website’s policy summary indicates, Sanders’ single-payer healthcare plan does not grant free medical services to legal residents, (as many conservative sources would have you believe) but rather it guarantees every legal resident health insurance.

While Sanders’ plan would allow every legal resident to be insured, it would also still allow private insurance companies to carry out the nefarious deeds we all know and hate them for.

If Sanders were indeed a socialist, he would not allow private insurance firms to offer services, and this duty would be transferred to a federal entity. While this would not eliminate the concept of insurance altogether, it would remove that domain from the private sector.

The second reason for which Sanders is not a socialist is the relative laxity of Sanders’ policies pertaining to big banks and investment firms. Again, this statement may seem bizarre given Sanders’ fervent promise to “make Wall Street pay,” but when one considers Wall Street’s role (or lack thereof) in a socialist system, Sanders’ positions seem quite moderate.

Sanders has pledged to audit Wall Street firms in order to prevent them from becoming “too big to fail,” in addition to expressing a strong desire to eliminate Wall Street’s influence on American politics. While not bad ideas, these proposals pale in comparison to the utter annihilation of Wall Street that would take place under a socialist system. 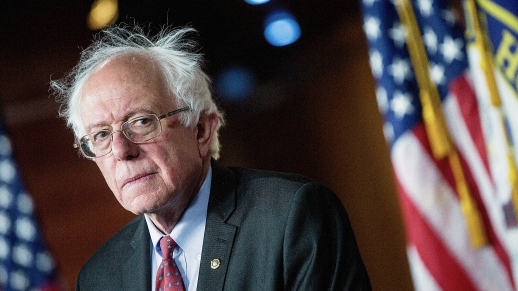 Socialist principles disallow private undertaking of financial and commodity-related endeavors such as large-scale banking and practices pertaining to stocks and bonds, and these duties would be performed by federal entities.

The third and final major reason for which Sanders falls a few kernels short of the socialist cob is on a much broader scale than the previous two. Although Sanders fancies himself a revolutionary, and is often referred to as being such, his policies do not change the established economic or political structure enough for him to be branded a revolutionary or a socialist.

The key concept of socialism is to eliminate private ownership of the means of production, and implementing a socialized ownership, something which Sanders has not even come close to mentioning. The notion of socializing the means of production can best be summarized in layman’s terms as giving the populace collective ownership of the facilities and resources necessary for the production of goods.

Due to these factors, we can reasonably conclude that Bernie Sanders is, objectively, still a capitalist.

However, this does not mean you should not support Sanders; I personally would heavily encourage you to do so, but it should serve as a reminder to not take the words of a politician as gospel.